Year 5 designed a fan which was triggered when something moved towards it! 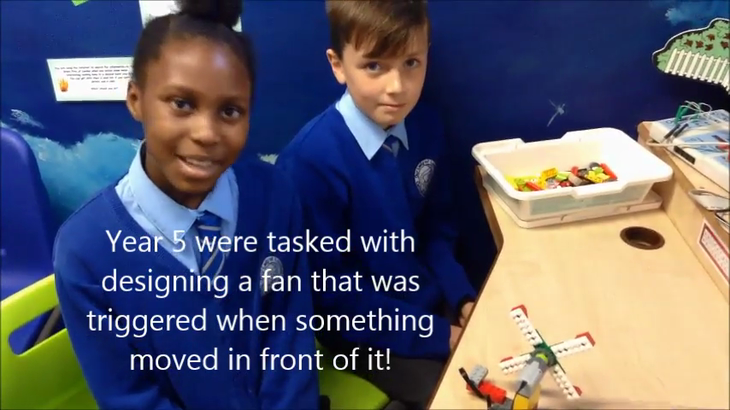 Summer Term - 2nd half
Year 5 have been learning about databases.  They have made their own class database, used this to answer some teacher designed questions, have answered each other's questions about the database (very interesting!)  They have then applied the skills learned here to help Agent X solve some crimes.  Some children even managed to help solve some crimes for old Sherlock Holmes too!
Summer Term - 1st half
Year 5 have been using Espresso Coding to practice their app making skills.  They then went on to use 2Code within PurpleMash and compared the two programming environments to help the school which, if any, to purchase next academic year! Thanks, Year 5!
Spring Term - 2nd half
5R have been using Lego WeDo to build models.  Take a look below!

Spring Term - 1st half
Year 5 used Kodu to make their own worlds.
Autumn Term - 2nd half

In the second half of the autumn term, Year 5 have been making games using a programming language called Scratch.

Take a look at the Scratch Studios to see our work appearing over the half-term....

In the first half of the autumn term, Year 5 have been using a programming language called "Logo" to produce patterns and learn about repeat commands and procedures.  Some of us were able to use variables too!